Basilica Cistern (Yerebatan Sarayi) provides one of the most breathtaking ambiances, like the other underground cisterns that used to form the water network for the capital of the Byzantine Empire. The water from the Northern water supplies were carried by the aqueducts and water canals to the city center and stored in these cisterns for the consumption of the citizens.

There were many fountains around the town to supply the needs of the local people and also the very cistern was the main source of the Byzantium Palace where it used to stand in the location of the Topkapi Palace now. The reason that this cistern is called Basilica is the Stoa Basilica, the holy monument that was standing on this by the underground cistern. One of the common questions that we encounter while assisting our guests is ‘Is Basilica Cistern Open?’ for visits now.

From the beginning of the pandemic, the most visited museums and monuments in Istanbul remained open for public visits, taking precautions and watching the rules applied by the authorities. However, the Basilica Cistern is closed from the first moment that the measures were in process regarding the society because of the unique environment that could ease the spread.

This gave the chance to proceed with the detailed renovation during the pandemic, and the cistern remains closed for the biggest maintenance of all time. The scientists point out that the Basilica Cistern is in danger of collapse, moreover this could affect the buildings in the surroundings. So, it is believed that the renovation will last some time and could impend after the pandemic. 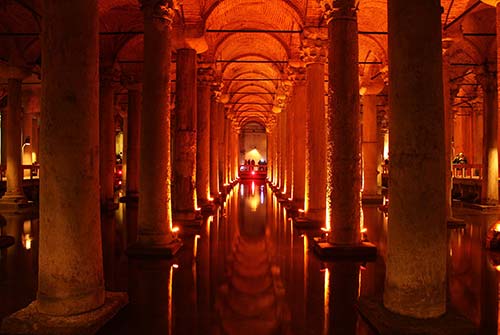 Are There Other Cisterns? Alternatives For Basilica Cistern?

Having stated previously, the water supply of Constantinople had many cisterns around the town, however, there are not many preserved ones. Only a few of them are used as living places such as exhibition halls, restaurants, etc. There are some others in good shape and are looking for a renovation to serve society accordingly. The most famous among the active cisterns, none of them during the pandemic though, are Serefiye and Binbirdirek Cistern.

Serefiye (Theodissus) Cistern is open as a museum, however, Binbirdirek Cistern is rarely open if there is an exhibition or a concert organized. Besides these, there are cisterns which became a part of the private properties now such as restaurants, galleries or even shops in the old city. These remain as the only ones that the visitors can see while touring the city during the pandemic.

Cisterns are some of the most picturesque and attractive places for the tourist who visit Istanbul, however, they have to be patient till the second notice that that will allow them to witness these monumental structures.

We will be at your service to assist you regarding the best experience that you could have during your Istanbul Trip . Please do not hesitate to contact us if you have any questions.

What To See In Sultanahmet (The Old City) In Istanbul

Which is Best Travel Agency for Istanbul Tours?

Is it suggested to have a tour guide in Istanbul?