Private guided 3 days tour option in Cappadocia, which has a lot to see and visit. A local expert guide in the language you prefer will save your time and give chance to see more sites and learn more about the history of the region, also will give you an opportunity to skip-the-line priority instead of waiting lines in museums. For first-time visitors, we will visit the highlights of the Cappadocia tour with live commentary of tour guides.

Underground cities are known as the safe spots of old Cappadocian people who were under attack by Persians and Romans later on. The very best shapes of famous Cappadocia fairy chimneys with the most picturesque frames for Instagram.

Naturally dyed frescoes of cave churches are shining under the glorious Sun which fertilizes the famous vineyards of Cappadocia producing local wine. Magical valleys of the Cappadocia region are covered in the itinerary with the best stops to take photos. Staying in cave hotels in Cappadocia will be a nice opportunity for you to make a Cappadocia tour.

Get picked up from your hotel by your tour guide and van to start the tour with the highlights of the Cappadocia tour;

See the amazing Uchisar Castle and the panoramic view of the beautiful fortress.

Be amazed at its history at the Goreme Open Air Museum and churches with gorgeous frescoes, paintings.

Lunch in Avanos, situated by the river of Kizilirmak or Halys River from ancient times as Herodes called it.

Walk through the Valley of Monks, known as Pasabaglar.

See the world-famous fairy chimneys of Devrent Valley. Transfer back to your hotel after the Cappadocia tour. 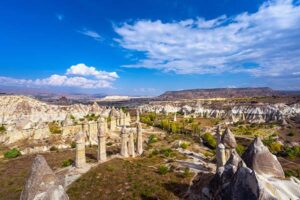 Optional: Hot Air Balloon Ride is suggested activity to see the real beauty of the Cappadocia area with the first lights of the Sun.

Get picked up from your hotel by your tour guide and start the tour with;

You will start the day with a visit to Kaymakli Underground City and will learn how and why they built such a place! To experience it, you will go down 50-80 feet!

Sobesos is a Roman Bath from the 5th century with mosaics and graves from Byzantine Empire Period.

Next, visit Mustafapasa to experience the Ottoman and Greek architecture of this old Greek village once called Sinasos. Transfer back to your hotel after the Cappadocia tour.

Get picked up from your hotel by your tour guide and van to start the tour with the highlights of the Cappadocia tour;
Derinkuyu Underground City is the deepest and the largest underground city of the Cappadocia region. Today only 5-storey is open for visitors and the other 4 layers are restricted for entrance due to lack of fresh air today.

Ihlara Valley is the longest valley of the Cappadocia region shaped by water floods and then monks created cave churches in this valley. Here we will do hiking by the Melendiz River which is a peaceful atmosphere for our guests to relax.

Belisirma Village is a stop for having lunch by the Melendiz River and a short break before going on our trip to discover highlights of the Cappadocia region.

Selime Monastery is a mountain carved and turned into a church by workers of the monastery. Despite it being used as a theological school for many years it’s almost abandoned for 2 hundred years and today serves as a museum for visitors who are keen on history and religion.

Keslik Monastery is one of the most gorgeous monasteries of the region which served as a home to most of the monks. Today it serves only as a museum however protects the beauty.

Pigeon Valley is the main stop of pigeons which are important animals whose eggs are used to color the monasteries. The pigeon is considered to be holy as it’s told in the Bible and other holy books and scrolls. Transfer back to your hotel after the Cappadocia tour.