Notice: Trying to access array offset on value of type bool in /www/wwwroot/guidedistanbultours.com/assets/themes/odeontours/inc/functions/template-functions.php on line 98 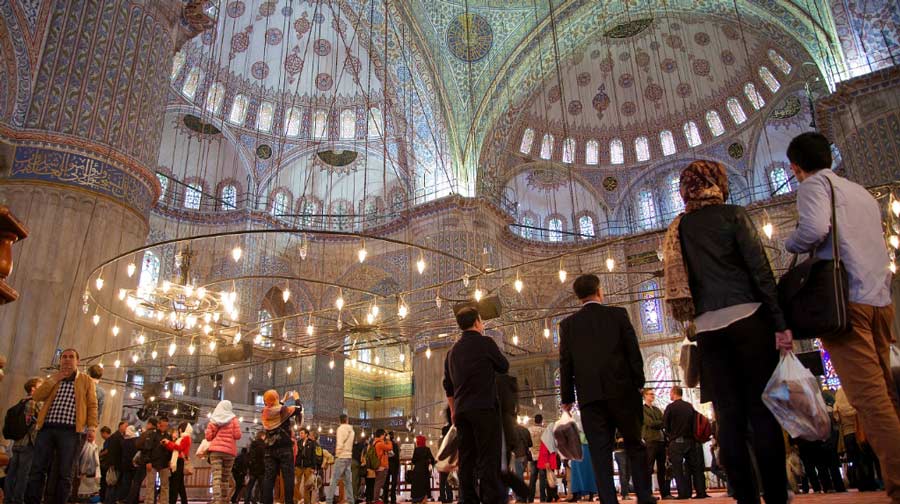 How to Visit Mosques in Istanbul and Turkey?

Things you need to know before you go to the Mosques

“Jews, Turks, and Christians several Tenets hold. Yet, all one GOD acknowledge, that is, GOLD”
Letters Historical and Critical from a Gentleman in Constantinople to his friend in London, 1730

Istanbul is home to over 3000 mosques, a city of diversified culture with the great history of the Ottoman Empires, Romans, and the ancient Greeks.

The city lies on two continents: Europe and Asia. Its also known as the city of mosques and Ottoman architecture, as the capital of the Ottoman empire since 1453 and the largest city in Turkey. 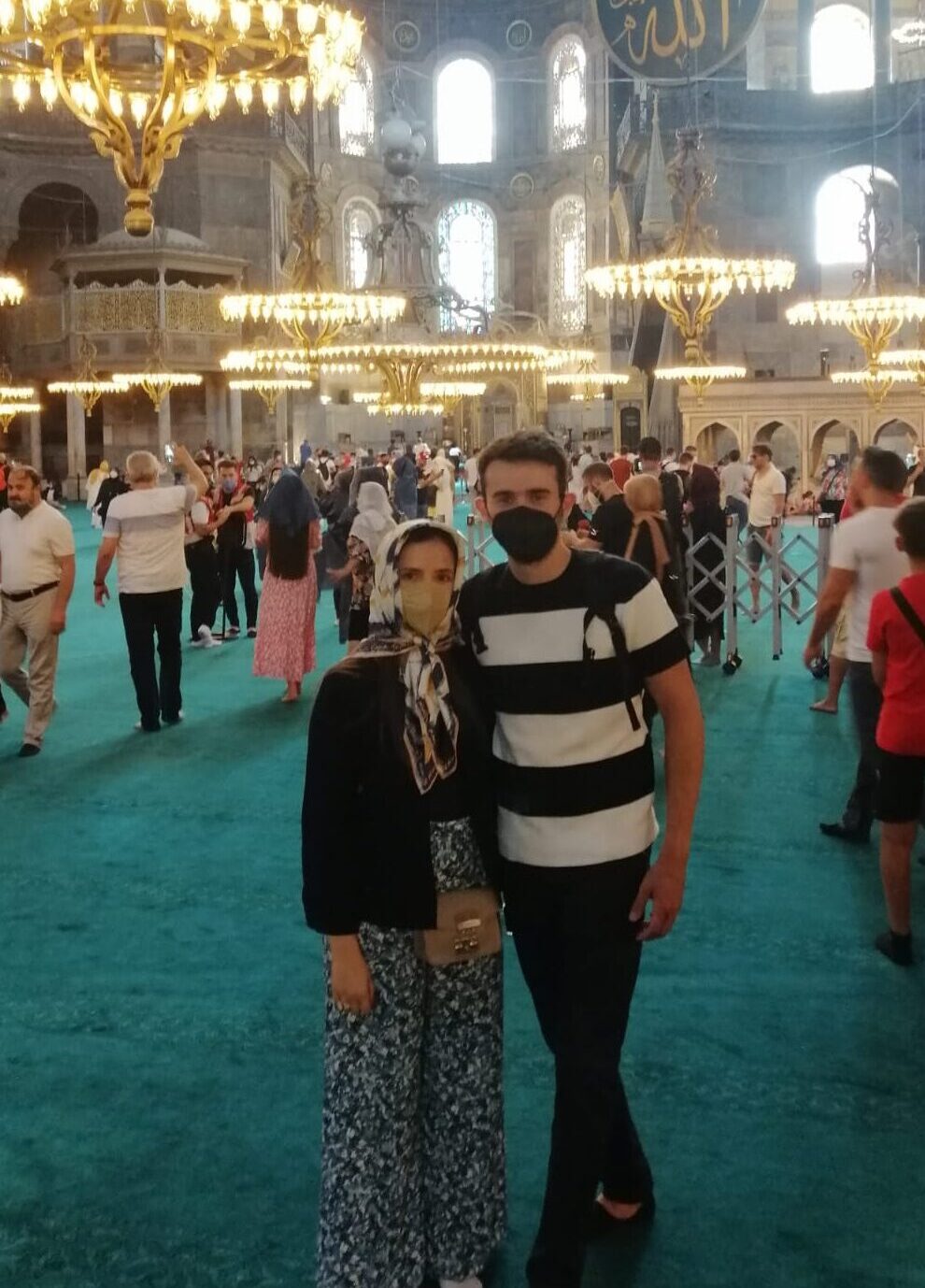 How should I wear when entering the Blue Mosque?

Sultanahmet Mosque and Suleymaniye Mosque are the most famous and have become the attraction point for tourists.

The rules for the female visitors before entering the mosques are that the head and body should be covered in the mosque, but pants aren’t allowed, and although people may think that leggings or jeans cover the body, and even without showing anything, it draws the legs a bit, so it is not considered a suitable outfit for a mosque, however, is available scarfs for the heads and skirt for the body at the entrance of mosques, and it’s free of cost as well as entrance. (Please note that this does not apply during the pandemic)

For male visitors, pants are allowed, but men should avoid shorts and tank tops, but is also provided for man in case he is not in the dress code. 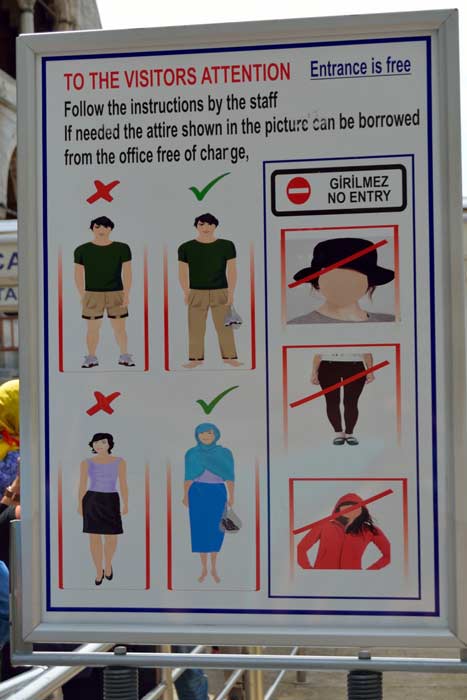 Should I take off my shoes before entering the Mosques in Istanbul?

Yes, inside of the mosques shoes are not allowed, before entering there are plastics bags available at the entrance where you can put your shoes and carry them with you during your visit.
The barefoot policy inside the mosques is to prevent damage or dirty to the exquisite carpets that cover the floor, another reason is that Muslims kneel on the carpets to pray. 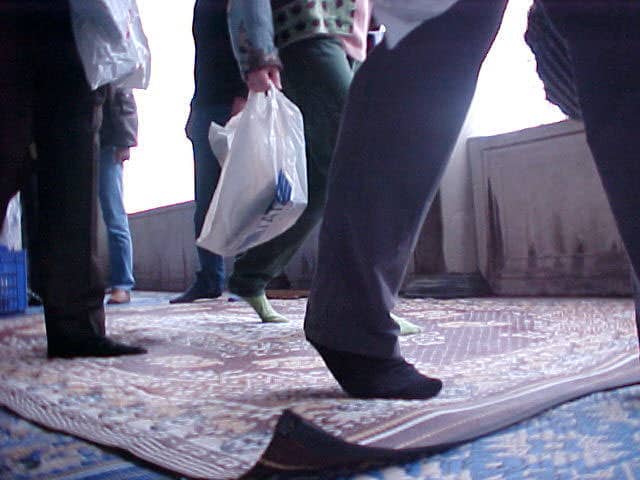 Shoeless in the mosque

How to behave inside the mosque?

Once you’re inside, don’t forget that it’s a holy place, and it is okay if you don’t believe in it, or if it’s not your religion, still a sacred place for Muslims and deserves  respect. When photographing don’t use flash, and don’t photograph people while they are doing prayer or ablution (washing that Muslims do before prayers).

How long should I reserve to visit for the Hagia Sophia and the Blue Mosque tour?

Hagia Sofia is one of the mosques most visited has a great history and architecture with so many details to be appreciated ideally you should reserve at least one hour.

For the Blue Mosque, you may take longer as currently, the Blue Mosque is under renovation, so for safety reasons, there is a limited number of people to get inside so you might a get longer queue. 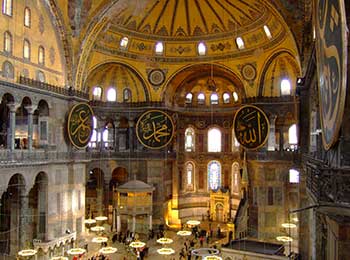 Inside of Hagia Sofia Mosque

Do I need to pay to go inside the mosque?

No! To enter the mosque is free! It might happen that someone approaches you before entering the Blue Mosque offering a “jumping queue service”, there is no such a service!
It’s a scam, what the scammers want is to take visitors to one of the souvenir shops or restaurants to make you spend twice as much as the normal price of things. To avoid this type of scam finds a well-recommended tour local guide service.

When is Sacrifice Eid in Turkey in 2022?