How to Visit Suleymaniye Mosque

All Emperors and Sultans of Istanbul tried to be immortal in the minds of people, and today we see their seals on every corner of the city and remember their names with monuments they left. Since Emperor Constantine till today every person who had power in his hand, tried to make himself immortal, and Suleymaniye Mosque is one of the best examples of this situation.

Magnificent Suleiman (in Turkish; Kanuni Sultan Suleyman) chose the highest hill of the Historical Peninsula for his own burial place (tomb) and mosque that will bear his own name for centuries.

His world famous imperial architect Mimar Sinan built this mosque in only eight years from 1551 to 1557 which is three years longer than Hagia Sophia‘s construction time. We should not forget that Hagia Sophia was built on a flat ground, but when it comes to the location of Suleymaniye Mosque, that’s on the top of a hill. In order to stabilize the structure and make it everlasting, Architect Sinan made an enormous stair in terraciform from hill to Golden Horn.

Not only a mosque with a large yard but also hosts a hospital, madrasah, theological school, hamam (Turkish bath), bazaar, library, tombs of Suleiman the Magnificent with his family and some other public buildings create this magnificent structure complex.

Where is the Suleymaniye Mosque?

If you are near Eminonu Square, it will take you ten minutes to walk there. But do not forget that you will have to climb the hill by stairs.

The other option is walk from the Beyazıt (Grand Bazaar) station of T1 tramline. You can make a short trip in Grand Bazaar and you should left from its north gate. Then you will reach to Suleymaniye Mosque 5 minutes walk.

How to visit Suleymaniye Mosque?

No matter your religion, you can go inside the building to visit. But there are some dress codes to Suleymaniye Mosque that respect for the Islamic rules and people which are praying inside mosque.

Men need to wear clothes until below the knees, and woman should to cover their head, chest,  shoulders and legs.

You can bring your own scarf to cover your head. If you are wearing shorts, tights or skirts, it would be good to use a shawl to cover your legs. If you do not have a shawl or scarf, you can buy it at the entrance of the mosque or near the mosque.

As a mosque, it is open 24 hours for prayers. Visiting hours is limited between 09:00 to 18:00 for foreign visitors and non-Muslim communities. These opening and closing times may vary depending on the summer and winter seasons, the change is only 1 hour and does not apply every year.

Muslim visitors can enter during prayer time without any problem, but visitors of other religions are expected not to enter on Friday morning and to keep quiet after the call to prayer and wait until the prayer time is over.

If you are in Suleymaniye neighborhood during prayer time and don’t know what to do; here is some advice. You can taste Kurufasulye (dry beans) in restaurants next to the mosque because restaurants in this area are well-known for that. You can also have a sip of tea in one of the terrace cafés by the mosque and watch a panoramic view of the Istanbul. Also, don’t forget to visit the tomb of Sultan Suleiman during your visit. 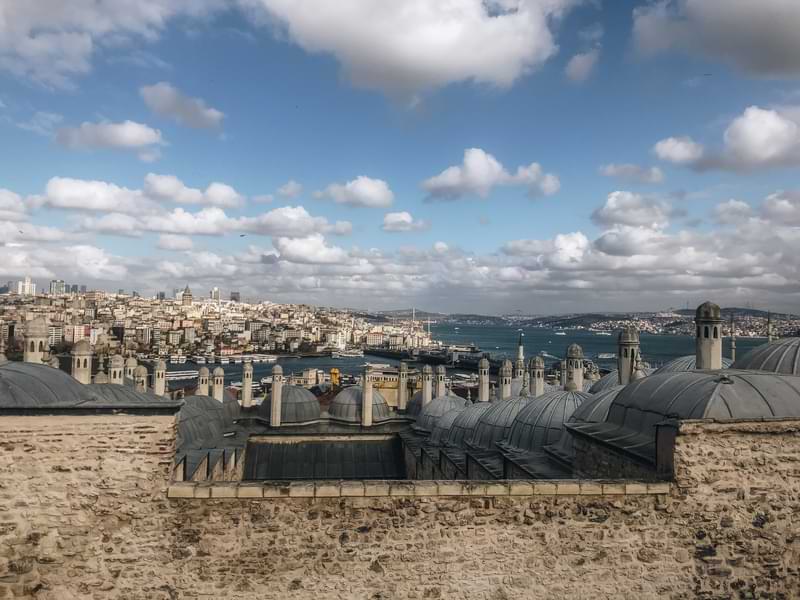 What time does the Suleymaniye Mosque be open on Fridays?

Prayer times in Islamic region are based on the position of the sun, so there is no fixed time for whole year. It can be said that the time of Jumah is about 13:30pm in the winter season and 12:00 in spring in Turkey. You can read exact prayer time on the following link of website of the Presidency of Religious Affairs .