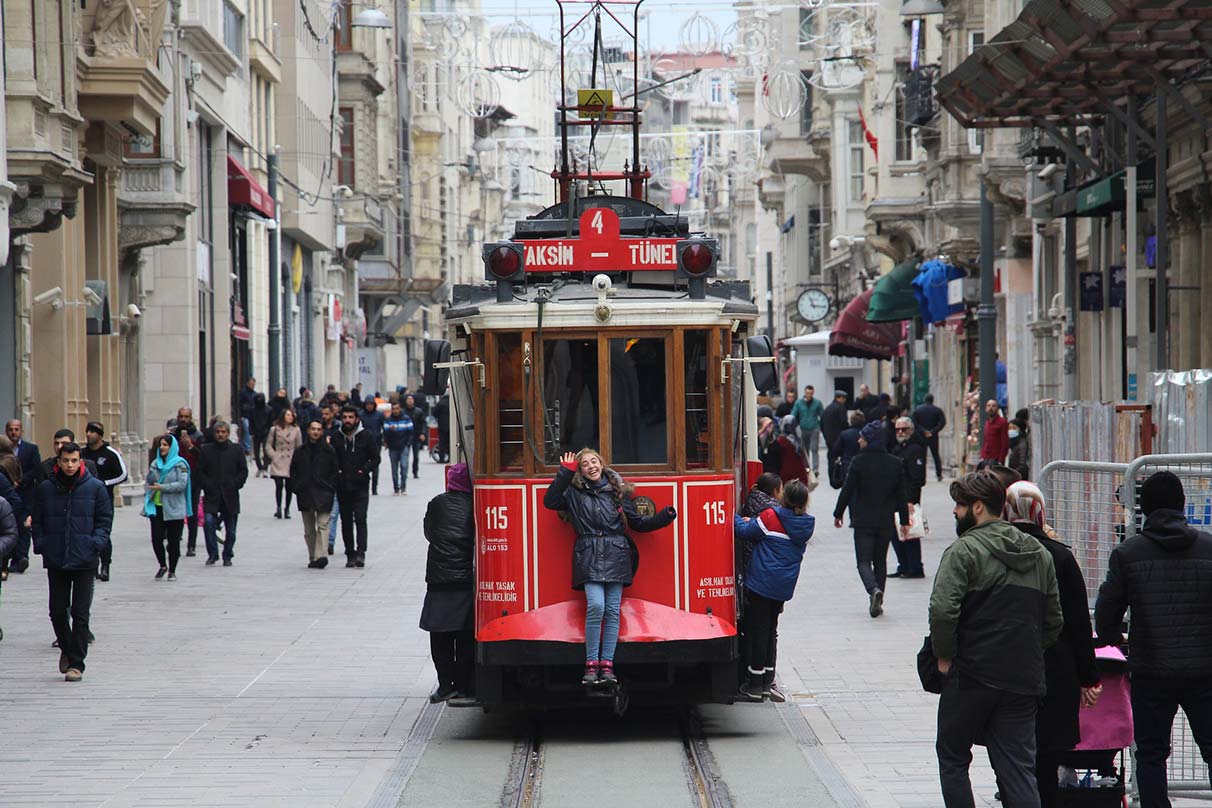 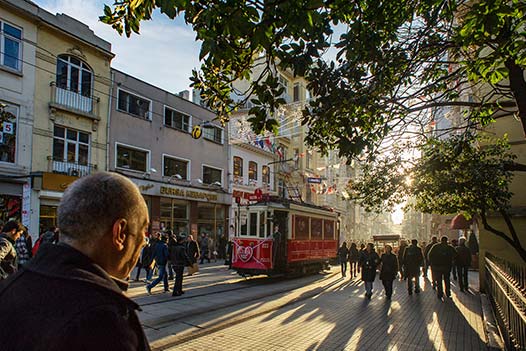 Being in the heart of Istanbul, Taksim Square and Istiklal Street reflect the facts about the evolution of Turkish society from the late Ottoman Era to the beginning of the 21st century.

Pera district was mainly populated by Levantens and Non-Muslim communities of Ottomans and was the symbol of the occidental face of Ottomans and names as ‘Cadde-i Kebir’. After the Turkish Republic was declared, Beyoglu continued to be what it was decades ago and was very popular among the Turkish people. The Istiklal street, which kept on calling by the name ‘Grand Rue De Pera’, was the place that the locals meet and go out for fun.

Cinemas, cafes, restaurants, patisseries, and nightclubs attracted people for a long time. Although the demography has suddenly changed after the interchange in the 20s and the unfortunate incidents in 60s, Istiklal Street survived as the most civilized part of Istanbul for many more years till the approaching Coup D’Etat in the 70s. Since then the district seemed to be mostly vacated and become as desperate as any other place or society till the effects of the army invasion is over. In 90s Istiklal Street showed signs of the old charming days and once again became the meeting point for the educated young population and cultural events.

However, this trend did not last long with the Islamic transformation of  Turkey and the Istiklal Street is deliberately left apart from its roots. Still, Istiklal Street is one of the must-see sites in Istanbul with all of its past and acts as an open-air museum for visitors. Let’s have a quick look at where to visit, what to see and eat in Istiklal Street. 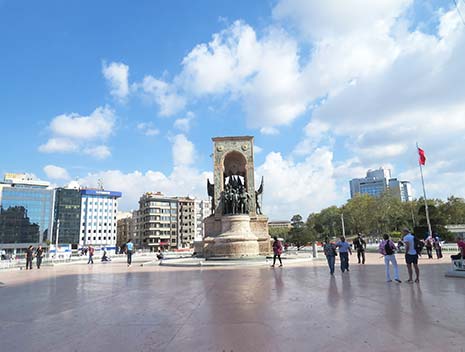 Taksim Square is the best place to get a move on the way to Istiklal Street. The Republic Monument stands in the middle of the square from 1928, to commemorate the foundation of the Turkish Republic and is the place where the ceremonies are generally held on national holidays.

Gezi Park, which became the center of the protests against the Turkish Government in 2013, still serves as a greenfield, despite the efforts to turn it into a shopping mall. It stays right aside as the figure of the opposition to Istiklal Street’s transformation.

At the very beginning of the street, at the corner, you may find the famous burger shops that are selling their wet burgers. Mostly consumed in the evening after the booze, burgers are always available and the shops are always busy.

Behind the burger shops, you will notice the bell tower of Hagia Triada Greek Orthodox Church. The church is quite important among the other churches in Istanbul as it is the first one allowed to be built after the fall of Constantinople. The neo-Baroque Church is completed in 1880, still is used on daily basis after being renovated and opened in 2003 again.

Across the shops, it is not possible to miss the huge construction of the Taksim Mosque, which is being recently erected. For many people, the mosque is the living symbol of so-called gentrification held by the government and the loss of the ongoing battle which aims to preserve the structure of Pera.

Once you begin to walk down, you will pass the French Consulate which is more likely a cultural center besides, offers courses and holds exhibitions all year long. 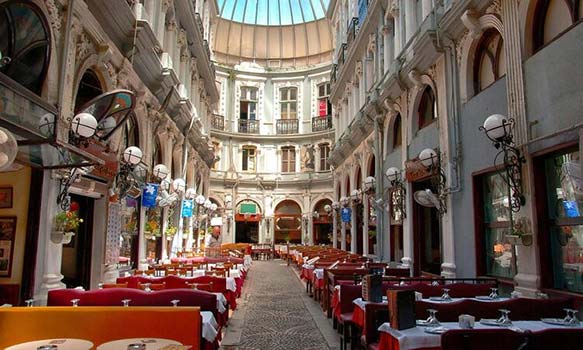 Before getting to the Galatasaray Square, you pass by several arcades including Atlas Pasaji, Halep Pasaji and Cicek Pasaji. While the others have stores and stages, Cicek Pasaji(Flower Passage) is quite interesting with its architecture and dining facilities. Restaurants that form the arcade are some of the best places that you can encounter the meyhane (tavern) culture. Usually, live music is the company all night long.

If you make a curl from the corner of Cicek Passage, you reach the reputable Fish Market where you may also find some restaurants to try the best of the seafood. Especially, in Nevizade Street, there is a unique drinking atmosphere almost every day of the week.

After filling your belly in the Fish Market, you may sip a Turkish coffee in a coffee shop in Hazzo Pulo Passage. The arcade has some authentic stores where you may buy handmade jewelry. 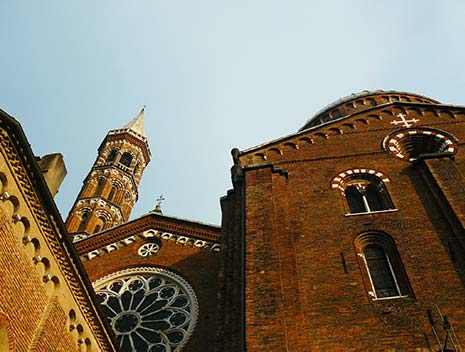 Right after Hazzo Pulo, on your left-hand side, you will notice St. Anthony of Padua Church, which is a basilica and the biggest active Catholic Church in Istanbul. It was demolished many times and rebuilt in the very exact place. Although the last form of the church was completed in 1912, the origin dates back to the 13th century, says certain sources. The church continues with its services and masses in different languages are held on weekends.

Located close to the St. Anthony of Padua Church, Pera Museum is one of the wealthiest art museums in town. Offering regular and temporary exhibitions, Pera Museum provides a memorable experience with its ambiance and orientalist touch.

Passing through the beautiful cafes and pubs you arrive at the Museum Of Illusions, a fun activity that will make you question your senses. This short break could teach you so many misconceptions that are commonly accepted.

Before taking the historical metro, which is the second eldest in the World, ‘Tunel’, we recommend you to visit the Galata Mevlevi Lodge Museum where you will face the vast history, tradition, and music of the Mewlewi culture that takes you back to the other-worldly times of Anatolia. The museum could be visited except Monday and there are regular ceremonies held in which you can participate.

These are some of the main attractions that you may visit spending some time around Istiklal Street. In the meantime, you can visit some other exciting churches, local antique stores, or art galleries if you want to have extended time in the Pera neighborhood. To make the most of it, a private guide’s company will always be helpful as there are many hidden gems around.