See the best sights of Ephesus on this 2-day tour with a private family-friendly local guide for your shore excursion. Marvel at monuments from the Ephesus Ancient City, Temple of Artemis, Temple of Hadrian, Library of Celsus, 24.000-seat Great Theater, Home of Virgin Mary, Isa Bey Mosque, Saint John’s Basilica, Temple of Artemis. On your second day, we will visit Pergamon Ancient City with a professional guide and private vehicle from Kusadasi Cruise Port.

Kusadasi is one of the most famous ports of the Aegean Sea and the shores excursion tour from Kusadasi port is a tradition to discover Ephesus Ancient City and House of Virgin Mary.

Upon arrival at Kusadasi / Ephesus Port with your cruise ship, you will see our tour guide holding a name sign with your name to meet you and start your private tour.

You will be transferred to Ephesus Ancient City with a private van your tour guide will inform you about the Ephesus region and historical background in your shore excursion tour.

Ephesus is the best-preserved classical city on the Mediterranean, and perhaps the best place in the world to get a feeling of what life was like in Roman times. Walk along its remarkably well-preserved marble streets, flanked by columns, temples, and fountains.

The House of the Virgin Mary lies just beyond Ephesus. According to Christian tradition, Mary was brought here by the Apostle John after the Resurrection of Christ and lived her final days in this house. A small shrine dedicated to St. Mary was found when the ruins of the house were first discovered. The Vatican has since recognized the site as the final resting place of the Virgin. Today it’s a part of our shore excursion tour and if your hearth is not in it we can skip it as well.

Visit Isa Bey Mosque from the 14th century by the first Muslim family that settled in West Anatolia. You will have great information about the architecture of the early Islam period.

We will continue with St. John Basilica where Apostle John died and was buried after he completed his missions in Anatolia. Then visit the Temple of Artemis (Diana) which was one of the seven wonders of the ancient world.

After the tour, your driver will drop you off back at the cruise port. 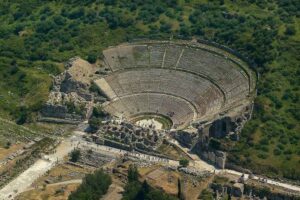 Your tour guide will meet you at the Kusadasi Cruise Port to start your second-day tour to visit Pergamon Ancient City.

Pergamon Ancient City: The Ancient City of Pergamon is the highest point of Aegean civilization left behind and today we will see these leftovers in the ancient city.

Pergamon Parchment: One of the richest and the most advanced civilizations of the area had created the top quality life in this city, today you will discover them with live commentary of your guide.

After the shore excursion tour, your driver will drop you off back at the cruise port. 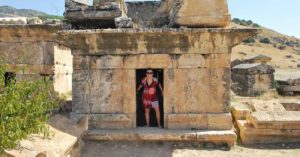