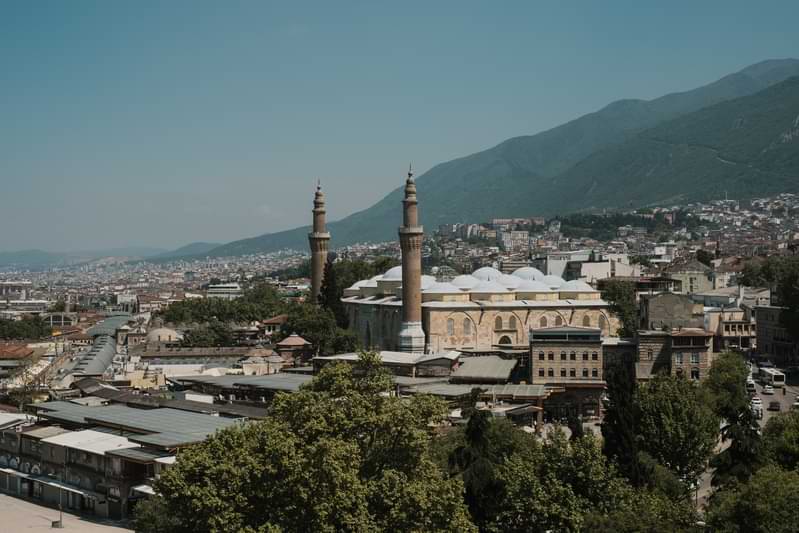 What to See In Bursa

Bursa is one of the destinations that are accessible for a daily visit from Istanbul. You may easily reach Bursa with a ferry from the old town in Istanbul or by highway through Osmangazi Bridge. Both ways last around 2 hours without traffic in inner cities. Bursa is the 4th biggest city in Turkey and was the first capital of the Ottoman Empire. Bursa attracts many tourists every year in all seasons, when you consider the things that Bursa offers, it is not hard to understand why the city is very popular amongst travellers. Let’s have a quick look at the places that attract attention in Bursa. 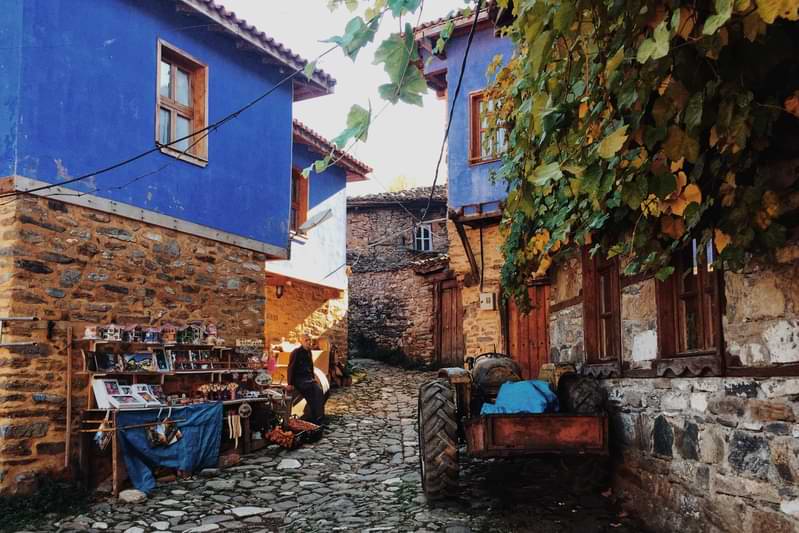 Previously stated, It was the first capital of the Ottomans and was conquered by Orhan Bey, who is the son of Osman Ghazi, the founder of the Empire. Early Ottoman architecture could be seen during the visit to Bursa, as well as the tombs of the father and the son. Still, the complexes of buildings adjacent to mosques such as Muradiye or Yildirim standstill, and they now serve different purposes. You may find the chance to buy souvenirs from small gift shops located around these complexes. Some of the beautiful Ottoman Houses continue to be in use in Yesil area where you may visit the glamorous Green Tomb which is the mausoleum of the fifth Ottoman Sultan, Mehmed I, built in 1421. After visiting the tomb you may sip your tea overlooking Bursa in the tea garden nearby. 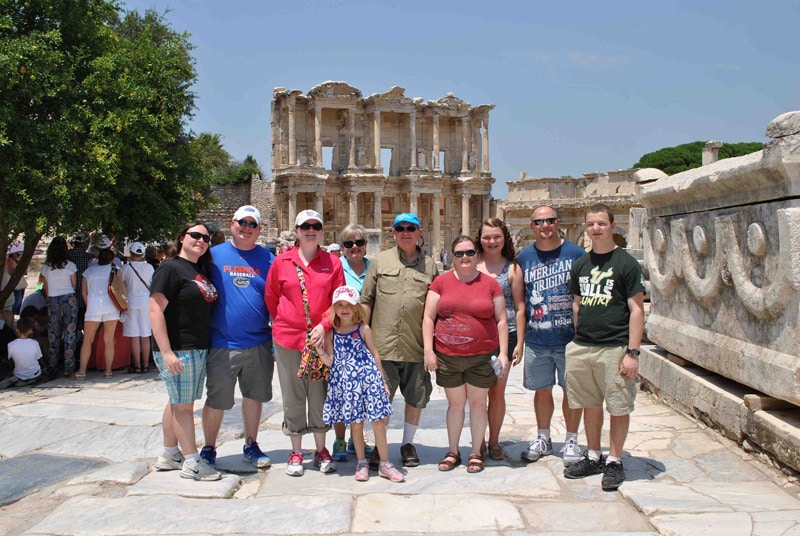 To get a better and a breathtaking view of the town, we totally recommend you to take the cable car that climbs up to the Uludag Mountain which also is a ski resort during the winter months. If you have time you may rent equipment to ski or enjoy the chair lift to the top. There are many places to chill and get a drink before getting ready to be back to the city center. 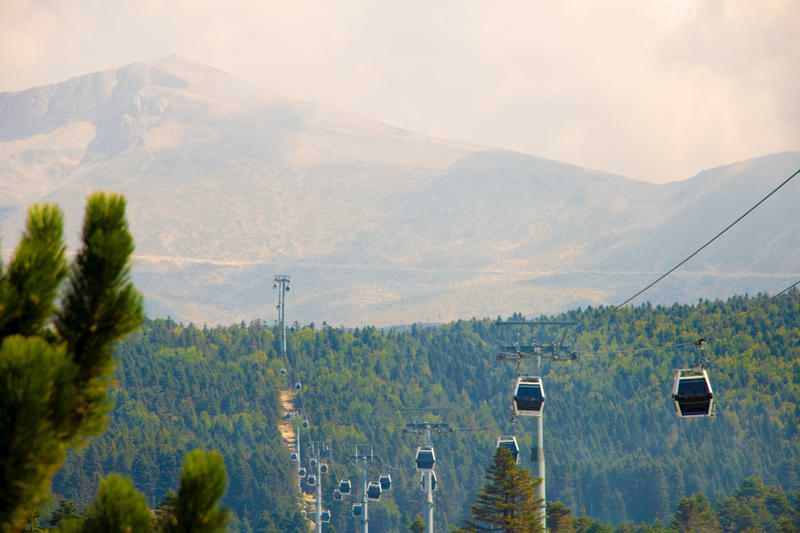 Once you are back in town, you should try the most famous Iskender Kebab which became a tradition for Bursa. Since 1867 the best kebap is cooked and served by Kebapci Iskender, still, you may visit the small blue shop before heading to Koza Han by the Ulu Cami, the landmark of Bursa. Koza Han is the place where you may find beautiful scarfs and clothing made by very good quality Bursa silk. The Covered Bazaar has lots of shops that sell the top quality fabrics produced in Bursa as the city continues to be the major exporter in this field. 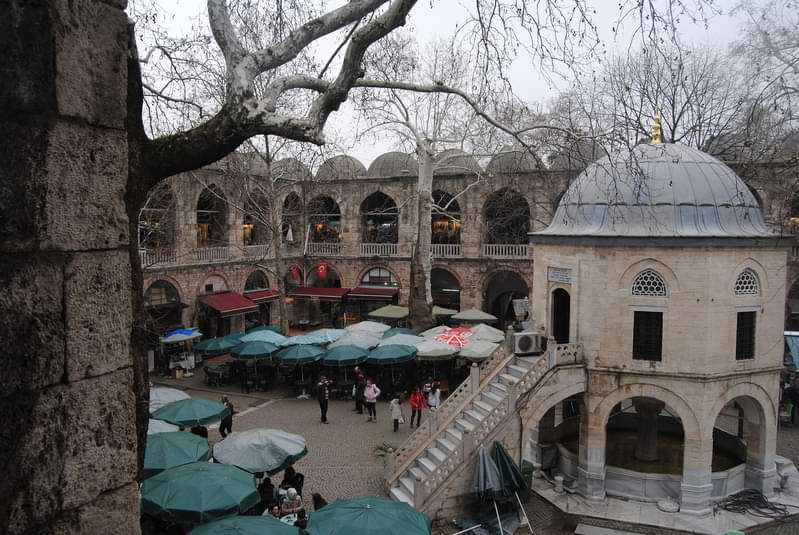 The Ulu Cami is the largest mosque in Bursa and a landmark of early Ottoman architecture, that using many elements of Seljuk architecture. Mosque was designed and built by architect Ali Neccar in 1396-1399 by order of Sultan Bayezid I. It’s a large rectangular building with twenty domes arranged in four rows of five and supported by twelve columns. Supposedly, the twenty domes were built in place of the twenty separate mosques promised by Sultan Bayezid I for the victory in the Battle of Nicopolis in 1396.

The mosque has two minarets. Inside the mosque there’s also a fountain where worshippers can perform ritual ablutions before prayer; the dome above the sadirvan is crowned by a skylight that produces a soft light and plays an important role in illuminating the large building. 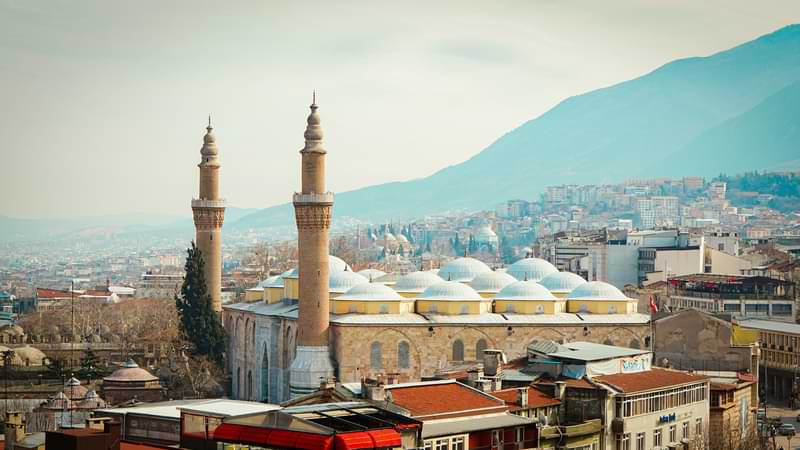 If you still have time, you can relax in one of the natural Turkish baths. They’re everywhere because the thermal water comes from the mountain. Don’t forget to ask for a treatment before sipping your ayran (yogurt drink).

Since time is limited to experience all this, it’s recommended to book a private tour to get the most out of Bursa. You can always contact us if you need help organizing your excursions in Turkey.